skip to main | skip to sidebar

I am up early after a good nights rest and walk into town while everyone is still sleeping. There is alot going on for such a small town. I walk down to the harbor and watch some of the fisherman unloading their catches. The town is mostly dirt roads with 2 main paved streets. I notice that there is Polica on almost every corner just hanging out watching everyone, weird. I start walking back to the hotel and see Shane, Luke and Jeff. We all walk to a breakfast place and get some shrimp omelette's and discuss today's plan.
Back at the hotel we pack everything up and ride out of town. Since we rode in at night we didn't really get to see what the landscape was like and were surprised by how the terrain had changed from desert to lush jungle. This was a nice change as we have been riding desert for almost 2000 miles and it was getting old. We come to a long tropical beach that looks like it goes on for miles and it looks like it connects with the road we are trying to reach to get to Puerto Vallarta. So we ride onto the sand and bomb down the beach. It is really smooth and we hit 80 mph+ on the sand. We do a bit of filming doing wheelies and drifting around and Luke busts out his P.O.V Helmet Camera and I have mine on so we get some cool double shots. 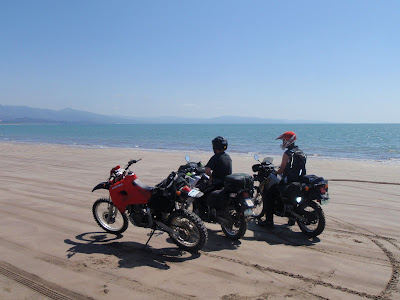 Connect back up with the road and now the terrain is very dense jungle, it looks like something out of the movie "The Island". The road is very twisty and Luke ends up going off the road at one point when he couldn't turn sharp enough.
After about an hour we are all getting hungry so we stop at a little restaurant off the side of the road. Order up a bunch of fish and shrimp ceviche tostadas and a round of beers. 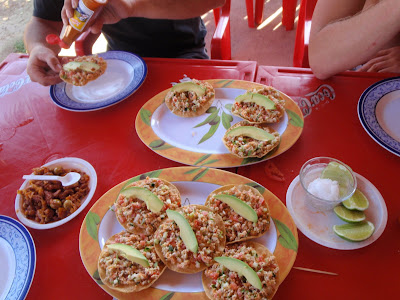 Hit the road road again and notice that Jeff's rear tire is leaking air, we fill it up at the gas station and will fix it when we get to Pureto Vallarta.
Arrive in Pureto Vallarta around 5pm and stop to look at our guide book to see where a good place to stay is. Purerto Vallarta is extremely developed and there is alot going on, looks like a fun place. We all split up and each of us goes to a different hotel to see how much it is and if they have a place to put our bikes. I find a nice one where they will let us bring our bikes inside the hotel for 400 peso's. 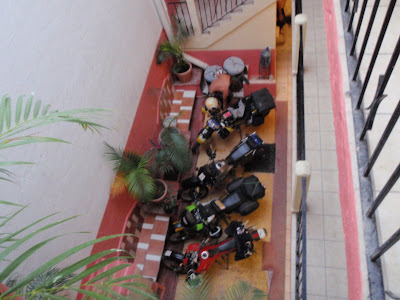 Wheel our bikes inside and unpack. We hang out for a bit in the room and Luke put on the DVD that Glenn (Striking Viking) from the day before had given him. It is the National Geographic documentary of Glenn's story of getting kidnapped in Columbia on his motorcycle. It was very well done and intense. Was cool seeing Glenn share his story on TV after we were just hanging out with him the day before. It really gave you a idea of how bad it was and how lucky he is to be alive. Strange thing was is that the story started off in the same place we had left from, Palm Springs. I hope that's not a sign of things to come.
Walk into town around 8 and get some tacos and check out the scene. Everything is very upscale and right on the ocean with tons of bars and clubs. Grab some beers and Margarita's at a billiard place and then walk to the main strip. We are getting offered drugs left and right and when we asked one guy where we were he replied with "Yayo Avenue" haha I thought that was hilarious.
We all have to take a piss so we walk down to the beach behind a big sea wall, I mention how this probably isn't a good idea but we do it anyways. As we are walking back up the stairs 2 guys in uniform with guns come up to us and start telling us how we are in big trouble and how what we did was illegal. Great, I've heard stories of tourists going to jail for doing this so it was not looking good. One of the guys is telling us how we have to go to the police station outside of town and pay 500 peso's each. He takes every ones ID's besides mine cause I don't have it and starts leading us towards the police station. We are arguing with him that we have no way to get there and he should just write us a ticket because we have no money and keeps telling us we are out of luck if we have no money. By this time I can tell he is looking for a bribe so I pull out 400 pesos and tell him this is all I have. He refuses and we are just sitting there getting nowhere and eventually he says put the money in the planter and we can go. So for 100 peso's each we got out of that situation which isn't bad. I guess everyone owes me drinks for the rest of the night haha.
A group of 4 Mexican girls is walking down the sidewalk and Luke starts talking to them, his Spanish is as bad as all of our's so I have no Idea what he is saying or how he is holding what seems like a conversation for so long. Turns out 2 of them speak decent English so we all start talking and decide to go into one of the bars together. 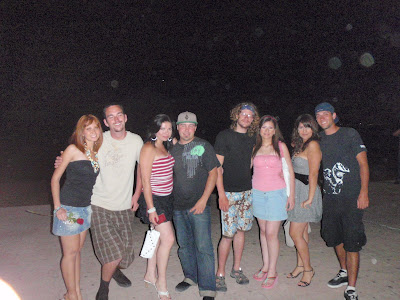 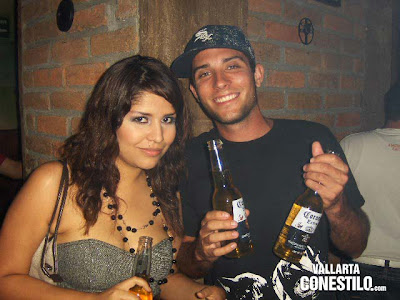 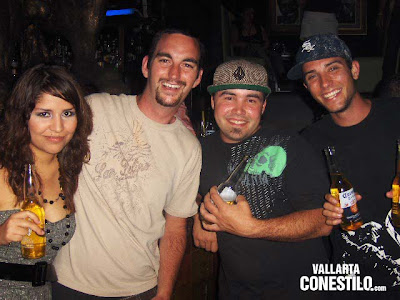 We get some beers and by now Luke is pretty drunk and he takes one of the girls onto the dance floor and just goes nuts. He is busting out moves not seen since the 70's and just cant be touched on the dance floor, it was awesome. I can tell he is going to be a good addition to our group. 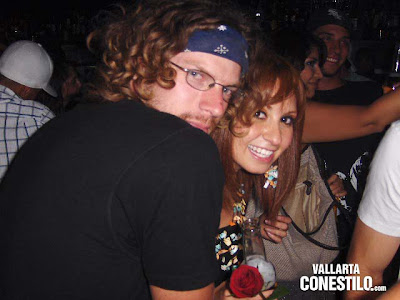 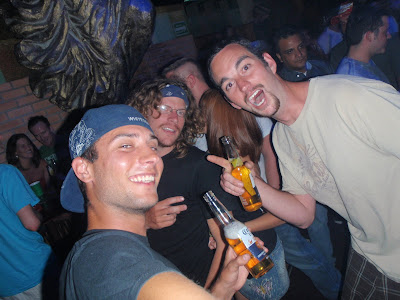 After we had spent all the money we brought out with us we say bye to the girls and head back to the hotel at about 3am. When we get to the hotel the owner is there and starts telling us how we need to move our bikes out of the hotel and onto the street because there is a taco stand where our bikes are at 6am. What, that makes no sense. The reason we stayed there is because our bikes and luggage were safe inside and we are not stoked on leaving them on the street. We argue with him politely for like 20 minutes and basically wake up the whole hotel on accident. We end up moving all the bikes onto the street and lock them up and go to bed.
Posted by Mendo at 10:40 AM