skip to main | skip to sidebar

We are contemplating going north to Playa Azul for me to recover at and then decide we are going to go south 65 miles to Zihuatanejo instead since we had heard good things about it from Clay and Kyles blog. They had just been there about a week before. Here is a link to their blog http://slingshotsouth.blogspot.com/
My clutch perch was shattered from the crash so Jeff went out into town to try and find something that will work and comes back with a pretty legit clutch perch and lever from some sort of street bike and adapts it to work on my bike. We then zip tie my decompression lever on and its good to go.
Our plan now is for Shane and Jeff to ride their bikes to Zihuatanejo while I take the bus there and leave my bike at the hotel for them to get the next day. I ask the hotel owners if its ok if I leave my bike there overnight and they said no problem so we pack up and I get on the bus while they take off on their bikes. 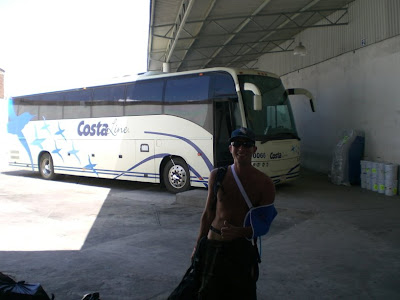 The bus was actually really nice and it only took about a hour. It dropped me off somewhere in town and I had no idea where Jeff and Shane were so I called Shane and he explained where they were but no one in town seemed to know where I was talking about so I ended up taking 3 taxi's to 3 randoms places and eventually found them at Hotel Angels where they had gotten a room for us.
Posted by Mendo at 5:54 PM